This farm, in New South Wales, has a whole array of soil moisture probes, linked to a computer monitor. The grower adjusts the irrigation system to keep the soil moisture at the optimum level.

As Mark Twain said: “Everybody talks about the weather but nobody ever does anything about it”.  This is wonderfully absurd at first blush, but lately it has been making me think. Suddenly, we are all having serious discussions about the weather and what actions we can take. And it isn’t just policy wonks: last week, I even heard some body builders at the gym talking about it.

There are two sides to climate change –  mitigation (to reduce greenhouse gas emissions and climate change overall) and adaptation (to deal with whatever comes down the pipe: from droughts to floods). When response to climate change really began to enter the public discourse (at the local level) in the early 2000’s, adaptation was viewed as appeasement – or giving in – and the action was all around mitigation strategies. Increasingly, it seems grossly irresponsible to not prepare in advance for potentially serious outcomes.

Really, we have to work on both, but they take different approaches and potentially different leaders. In my experience, adaptation is much easier to communicate to the public, and more straightforward to deal with at the local government level – even given all the uncertainties about what might happen. Essentially, we are managing risks. Adaptation strategies are mostly centered around tangibles like water and food. Mitigation is much more difficult for people to internalize. How can I, one small person, make a difference?

“It’s all too abstract and distant — and none of it could possibly feel like a big deal, the way a mortgage default or a national bankruptcy would hurt today.”

For mitigation, in particular (because of this vagueness), it is important for government – Federal and provincial – to set the tone, and establish benchmarks and national/provincial standards for communities to work toward.

I’ll be posting frequently about climate change, which is why this is called Part 1 of Many. In a practical way, many of the things one might do for adaptation are useful and valuable for other reasons. Take farming for example. 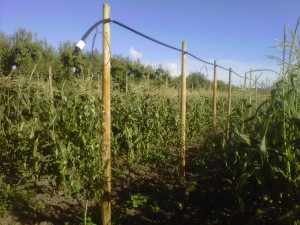 Switching to drip irrigation grows healthy fruit crops with less water. Although it doesn’t work for all crops, farmers who transition to advanced irrigation systems can get by more easily during a drought, even if their water allocations are reduced for a season. There are less financial risks. At the same time, it reduces the costs on the system to capture, clean, and transport the water to the farmer because they are using less.

There is a lot of interest in this angle from the federal level, and the National Roundtable on the Environment and the Economy (NRTEE) is launching a study called Climate Prosperity to dig deeper. I was contacted last week by a researcher from NRTEE looking for contacts of Okanagan fruit and grape growers who are explicitly adapting to climate variability or climate change. They had put on a workshop with us last February, to study the Okanagan’s water governance, and are looking at other innovations in the valley.

When I brought this up with some farmers later that day, there were a number of jokes exchanged about acres being planted in Shiraz (apparently a warmth-loving variety), but no firm examples. To me, this doesn’t mean that adaptation strategies aren’t happening, but perhaps climate change is just one motivation to undertake a suite of upgrades that helps you stay competitive.

For the time being, I don’t think many Okanagan farmers will make serious changes to their business specifically for the sake of climate change. The impacts are just too difficult to predict. Nonetheless, in a water policy visit to Australia last year, we found a different attitude.  There, the climate fluctuations have been so extreme, that only those farmers who have invested in their water management systems are staying competitive – some wineries won’t even buy grapes from growers without soil moisture monitoring systems, for example.

The most fundamental adaptation is developing our water infrastructure and our policy structure in such a way that we can accommodate climate variability, and an uncertain future.  This is the real work.

4 thoughts on “Adapting to climate change – Part 1 of many”