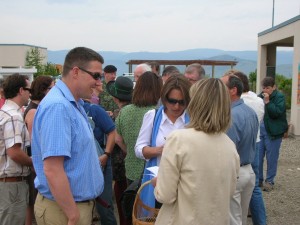 It's difficult to photograph collaboration, as it takes place through large groups meeting and talking together. Here, government folks, community volunteers, and university people gather to sign a memorandum of understanding.

“It’s less worry about being in over your head, if you know how to swim.”

There is a sense of urgency about leadership in the watersheds of BC. I know this, because there are at least five workshops this autumn dedicated, in some way, to governance.

The world is changing, and everyone is trying to catch up. In this new era, “governing” by a central authority has become weaker. Our budget priorities are focused on health care and education (not many quarrel with this emphasis), and the resource agencies have downsized. In the absence of strong top-down control, watershed decision making has to broadened to include many different voices. This can be a good thing, but it can also be messy.

And there are really important decisions to make. Who should get water? What activities should be allowed in the forested drainages around drinking water sources? Who will go after the polluters? Who pays for what?

The new paradigm is collaboration, and collaborative governance.  That is to say, communities working together among themselves, along with agriculture, industry, recreational users, fisheries regulators, and any other water stakeholder (and who isn’t one?). First Nations are central figures, both because they are fellow communities sharing the resource, and because of their ancient, but not yet fully-recognized, water title and rights in BC.

I find governance a clumsy word. Like “sustainability,” it means different things to different people – but generally, it refers to the process of including many voices in decision making.  Governance isn’t just who makes the decisions, but how the decisions are made. The problem is that there isn’t a clear model or structure for collaborative watershed governance in BC. We find ourselves in deep water, learning to swim.

Part of the flurry of workshops, then, is to sort out what might work under different conditions. The pressure is on to find working models for collaborative governance because the government of BC is in the process of revising its century-old Water Act, and there is the potential to include enabling legislation for watershed-based decision making. But what should that legislation be?

The main focus is on watersheds (but not exclusively so), because they are the basic unit of interconnected resource use. Here in the Okanagan, it is clear that activities in Vernon, whether good or bad, influence the water quality or water supply downstream in Penticton and Osoyoos. In other areas, especially on the coast, a “watershed planning” area might include several disconnected drainages, all feeding into the ocean.

There are many benefits to including a broader collection of voices in decision-making, but I strongly believe that we need a defined set of structure and principles to make collaborative governance work.  I am a big fan of the democratic process, and having a chain of accountability back to the citizens at large.  Michael McCloskey (former Chair of the Sierra Club) wrote a very compelling argument for this more than a decade ago.

For richer or poorer, for better or for worse, we elect our leaders, and they represent us. For me, then, a core principle is to find ways to include both the voice of the water stakeholder, and the average citizen.

Our current social experiment in British Columbia is to try different models of collaborative governance in different areas, under the philosophy that “one size doesn’t fit all.” In the Okanagan, our model is to have collaboration between local governments (i.e., the Okanagan Basin Water Board) as the focus, and to include a formal channel for stakeholder involvement through the Okanagan Water Stewardship Council.  This maintains a strong link to the electorate, but opens the door to other voices.

The most important ingredient for collaborative governance – it is almost redundant to say – is to build a community vision, a community consensus, about what we want our watersheds to be like in the future.