“As I looked down, I saw a large river meandering slowly along for miles, passing from one country to another without stopping. I also saw huge forests, extending along several borders. And I watched the extent of one ocean touch the shores of separate continents. Two words leaped to mind as I looked down on all this: commonality and interdependence. We are one world.” – John-David Bartoe, astronaut

The one time I went to a reunion with my grandmother, I couldn’t get over how much these new-found relatives looked just like me (big smiles, round faces). My family had doubled in size overnight. That’s the feeling I had this week at the bi-national Osoyoos Lake Water Science Forum. Our Canadian maps may stop at the 49thparallel, but the basin continues south and includes a larger watershed family. If we are going to use the slogan, “One Valley, One Water,” we have to think bigger. 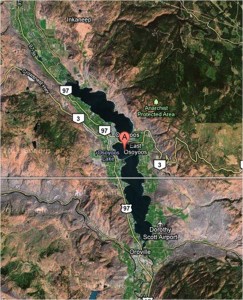 Osoyoos Lake from space, where the distinctions blur between where one jurisdiction begins and another ends.

Alex Louie, who filmed the proceedings for the Osoyoos Indian Band, reminded the group that from the indigenous point of view, the international border doesn’t exist. The Colville Confederated Tribes are the same people as the Okanagan Nation. Looking around the room, you could mostly say the same about the residents of Oroville and Osoyoos (the U.S. and Canadian towns along the lakeshore), or even the visiting university and agency people – shared values, shared backgrounds, shared interests.

There’s no question that Osoyoos Lake will be healthier if we can take a common, ecosystem-based approach to water quality and water supply problems. Lake levels, flow rates, watermilfoil control, shoreline access and zoning all lend themselves to collaborative processes.  On the other hand, we can’t just throw nationhood and politics out the window.

The International Joint Commission (IJC) was formed by the 1909 Boundary Waters Treaty, to “prevent and resolve” disputes between the U.S. and Canada. The IJC oversees the Osoyoos Lake Board of Control (est. 1946), which carries out the treaty provisions established by the Commission. In practice, this has involved yearly public meetings with local residents, and communicating with the dam operator about raising or lowering lake levels. 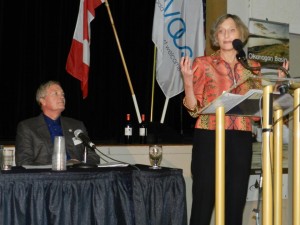 “The power and force of Mother Nature is great. What the IJC can do is ensure the best possible use of the science in its decisions with respect for diversity of needs, ecology, and peoples. By listening, we will find the best solutions with what Mother Nature is giving us to deal with.” Lana Pollock, Chair of the IJC's US section, speaking in Osoyoos. IJC Commissioner Lyall Knot looks on.

Different watersheds have structured their boards in different ways – depending on local conditions.  Some have expanded existing Boards of Control to include more local representation, and others have formed external committees for local input.  It’s an open question what structure might work best for Osoyoos, or even, at this stage, if it is the right way to go.

To establish an International Watershed Board for Osoyoos Lake we’d need support from the Province of BC and State of Washington, and from the existing Board of Control. When I informally floated the idea with BC water policy staff, they expressed concern about the jurisdiction and authority of an International Watershed Board, and the need to protect BC interests. Presumably, Washington State would have similar concerns.

But reading the report and the list above, the authority of the Watershed Board seems to be constrained to carrying out IJC treaty provisions (lake levels, for example), and otherwise acting much like the Okanagan Basin Water Board – a go-to organization to convene public meetings, conduct studies, and improve cross-border understanding and communication. It could also give material support to the small watershed groups in Osoyoos and Oroville that are struggling from lack of resources. With little regulatory authority, an Osoyoos Lake Board should not threaten municipal, state, province, or national interests.

Clearly, the Okanagan Basin Water Board would need to participate, to connect the Osoyoos Lake Board with their up-stream neighbours.

In 2007, the Osoyoos Lake Water Science Forum focused on a range of issues about the ills of Osoyoos Lake, the bright spots, and what actions are being taken by different groups. We made friends with U.S. Okanogan residents and agencies, and over the next four years started doing small joint projects and meeting together. Whether or not an international board can be established for Osoyoos Lake, it is heartening to be presented with the idea of a broader mandate for continuing to work together as a watershed family, and funding for local science and data collecting.

An International Watershed Board has the potential to create many more opportunities for restoring and protecting the health of Osoyoos Lake. 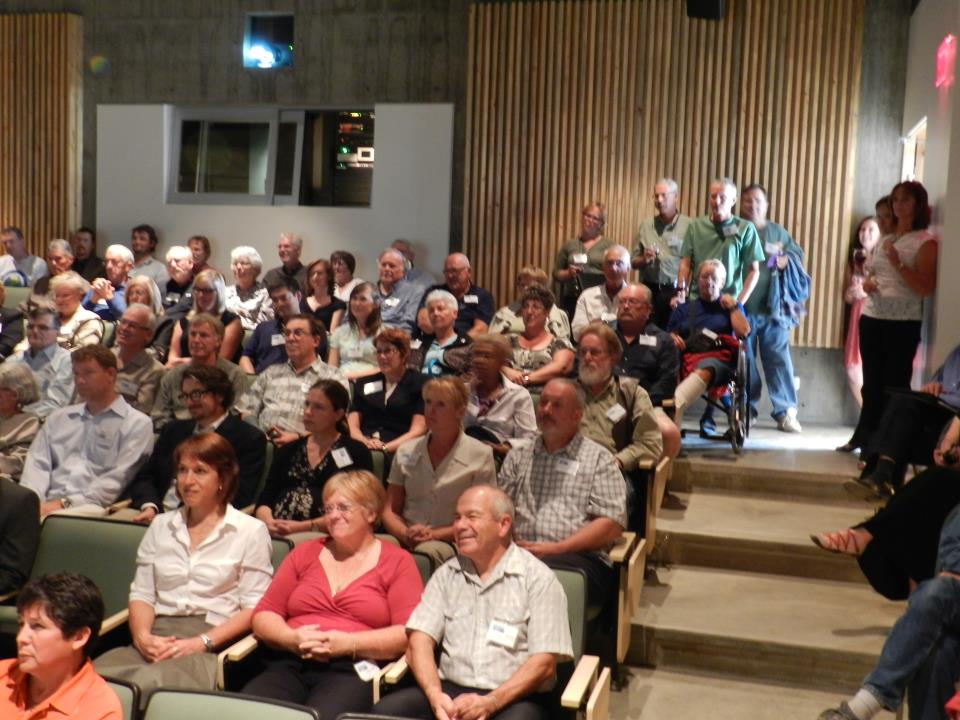 In this picture, you can see Chief Clarence Louie in the foreground, and auditorium seats filled with politicians, scientists, towns people, and agency reps. I'm sitting in the second row with Councilor Walt Hart and his wife from the City of Oroville.

2 thoughts on “An international watershed board for Osoyoos Lake?”