I got fairly hot under the collar at a Bill Rees’ talk last fall – in my mild-mannered Canadian way.  He’s a UBC professor famous for his work on ecological footprints – great stuff, that I’ve used to teach classes in the past.  Where I took issue was the tenor of Bill’s talk. To begin with, I never do well with extremely grim forecasts. Being in the environmental field, the future can easily be cast in a dim light, but fearless optimism is more to my taste. We start with the premise that the situation is workable. 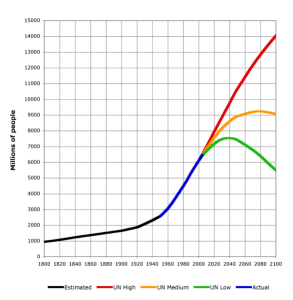 World population from 1800 to 2100, based on UN 2004 projections and US Census Bureau historical estimates - by Loren Cobb

Bill’s subject was climate change and population growth, the likely tides of environmental refugees, and how we needed to draw the line in some way on our own growth and development.

I grant that we need to change our approach to the growth of our cities, but as the world approaches 7 billion people this year, we have to accept that some will move here. We even welcome them – Canadians are aging, and we need workers of all kinds and levels of education.  Canada is one of the world’s great immigrant nations.

Although climate change is likely to be gentler to western Canada than many other parts of the world, we won’t be untouched.  Climate adaptation is, as they say, all about the water.  I’m often asked, “When will we run out of water? Should we stop all growth and development?” 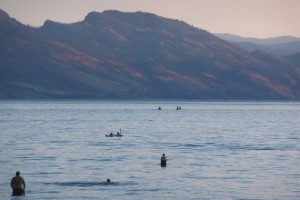 Swimmers and waders in Okanagan lake, enjoying the heat of summer.

In the Okanagan, we are in for longer, warmer summers, and warmer winters – bringing the twin squeeze of less snow pack, and greater water demand from irrigation.  Since our reservoirs were designed to include snow-storage, we don’t have space to hold all the winter precipitation in liquid form and must release it downstream.

This combination sets up summer low-flows, especially in the tributarys to the Okanagan valley lakes.  As the valley’s population grows, there will be more competition for water between people and the environment. La Nina delivered a lot of water in 2011, but brought flooding and (in 2010) a massive mud-slide in Oliver. Surges of stormwater overwhelm drainage systems, and pollute intakes.

The theme of the Okanagan Basin Water Board’s annual meeting this year is “Water leadership in changing times.”  We are intimately curious about water leadership, and how we can help accommodate changes as they happen.

Change is also taking place on a political level.  This year we have a new Premier, a change in cabinet, and a re-ordering of the ministries. The Ministry of Environment continues to revise the century-old water act – trying to devise policy that works for the diverse geography of BC – but we won’t see this passed into law for another year or more.

The bottom line is that there is uncertainty in all of our planning, at all levels of government. But we can’t wait around for the government’s action before we start making plans and taking action.

What we do know is that despite modernization of the water act, there will be no new funding to implement the regulations.

Local governments are naturally not keen to shoulder extra costs, so more emphasis is being placed on full-cost recovery for services, and on streamlining. But, although population growth and water shortages are inevitable, conflict doesn’t have to be. The patterns of development make a huge difference in water use– low impact, high density vs. paving and sprawl. This is also less expensive to service and maintain, over the long-term.

We joke that the new definition for “innovation” is doing more with less, but really, we prefer to emphasize “DOING MORE” – regardless.

Leadership for water in the Okanagan, where there are so many different governments and agencies, isn’t about top-down authority – it can’t be.  Leadership is gathering and focusing the ideas and energy of all the different partners.  Things get done rapidly and efficiently when we can learn from each other, share resources, and decide on priorities.  This was why the Okanagan Basin Water Board was founded 40 years ago. This is the meat and potatoes of watershed governance.

Somebody asked me last year, “What does water sustainability look like?”  I answered, “Water sustainability isn’t a place, it’s a process. It’s what happens when there are plans and agreements in place that keep problems from occurring, and that create a system for dealing with issues as they arise.” 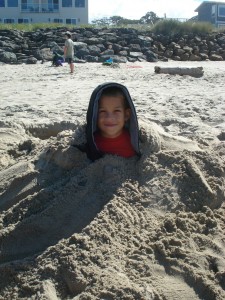 My cousin, who really appreciates the water.

This is the next great leap forward for the Okanagan, and a great challenge.  Historically, the communities in the valley have been fragmented and parochial, but things are changing for the better.  There is capacity and deep understanding about the value of water – everyone in the water field who visits here remarks on how well educated people are about the issues. The Okanagan Basin Water Board’s leadership role is to bring everyone together, and be a vehicle for sharing resources.

And when will we run out of water?  And what’s my response to Dr. Rees? We can’t shut the door to new residents to the valley – and most of us probably don’t want to.  There is no change we can’t adapt to if we work together.

2 thoughts on “Water leadership in changing times: trials and innovations”