I think we might be going back to the future with our new paradigm of watershed collaboration. Having the right people in the room has always been a recipe for good government (probably before the Romans and Greeks…). What may be new is formally using collaboration to improve our resource management. 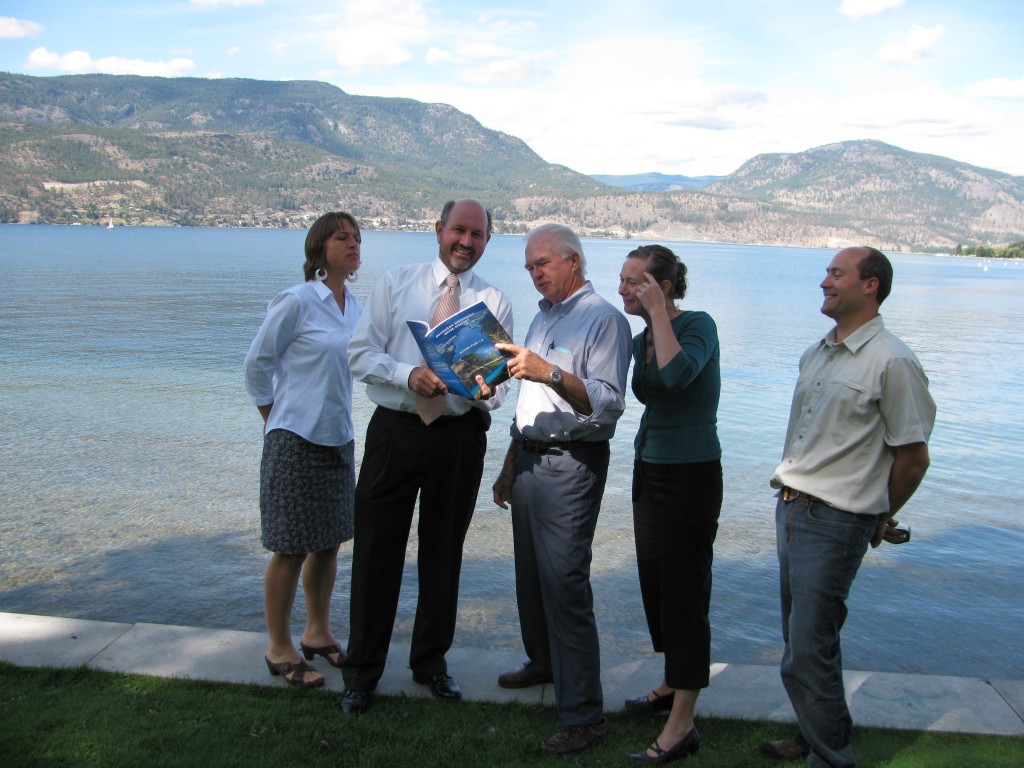 Goofing around at a photo-shoot for the Sustainable Water Strategy - From L to R: Anna Warwick Sears, Bernie Bauer, Tom Siddon, Kellie Garcia, and Nelson Jatel.

And let’s put “new” in quotes. The Okanagan’s Water Stewardship Council, Ontario’s Conservation Authorities and Alberta’s Watershed Planning and Advisory Councils have been on the landscape for decades. But never mind that. Ten years into the 21st century, this idea is coming of age.

Somebody once told me that BC is a banana republic, except the bananas are bigger. She was referring to the forest industry, but the basic idea is that our economy depends on resource extraction.  Nonetheless, nobody wants BC stripped off like West Virginia. We want to move on the good projects, and leave the others behind.

Similarly, with water, we want to keep it clean and flowing – but use it for washing and drinking, for farms and for fish. It seems sensible to sort through competing interests and potential conflicts by getting those interests to talk together.  If it worked for Rome, it should work for us.

Not all ideas have legs – but which ones can run? The Okanagan’s Council is a diverse group – all volunteers – intensely interested in getting it right. Each month, the fruit grower (acerbic and funny) sits down for lunch with the realtor (jovial), the rancher (charismatic), the water engineer (serious), the fisheries biologist (also serious), the climate scientist (insightful and elegant), and the rest of this community to plan the next actions to take on water pollution, or drought, or fisheries protection. The Council advises the Okanagan Basin Water Board, who, after applying their own filter and discussions, can put the best ideas into motion.

If you are stumbling over the definition of governance – how making good decisions takes more than just decision-makers – this is a great example.

It’s the Council’s relationship to the Board that make both wildly productive. The Board (mostly  elected officials), confers accountability to the Council – as it represents the interests of Okanagan citizens as a whole. The Council (experts in many fields) grounds the Board’s ideas and actions with technical legitimacy. Together they balance the scientific and the political, and bridge the valley.  This is really a critical point, because I don’t think either would work as well without the other.

The best evidence is our history. The original Council was formed in 1970 or so, but it was soon dissolved for reasons lost in the mists of time.  Without this external influence, the Board took on a simple, narrow focus: controlling aquatic weeds and giving grants for wastewater treatment.

The Council was reformed in 2006 – riding a wave of public concern about the state of the watershed. For the first two years, the Council systematically reviewed the valley’s water issues, and talked to everyone – creating a sustainable water strategy.  Most importantly, over the months of research and long lunches, they got to know each other. When you have good relationships between the right people you can get a lot done.

People coming to a meeting for the first time are bewildered by the flurry of jargon, acronyms, and side comments. I always say it’s like doing French immersion. Everything sounds like a foreign language until you get to know the issues and the personalities, then suddenly you are speaking like a native.

Scholars and theorists have argued that stakeholder groups like the Council should be considered as an actual decision-making body, but I don’t agree.  I think it is freeing to have the actual decision-making take place by another body. The Council had an internal crisis in 2010, when the Council fell into disagreement about agricultural water policy – there were tense phone calls, emails, and small groups meeting over a number of months before a more mutually-agreeable approach could be created. A Council can take time to work through complicated ideas – rife with potential conflict – in a way that would be difficult for an elected Board.

Also, the ability to take action requires more than just decision-makers. The Council members are highly skilled and connected, and know how to get things done in their sectors. It is exciting to sit at the table and hear one person suggest a funding opportunity, another offer scientific research support, another to steer the project, and the next thing you know, there are monitoring wells going in.

If there is anything that the Okanagan can teach other places about water management, it is the value of this dynamic combination of a Board and Council, complementing and strengthening each other, allowing scientific and water sector ideas to enter political discussion, and lending political insight to stakeholder passion.

I have to say, I’m flattered that the Council of the Federation stole our name for the national organization. 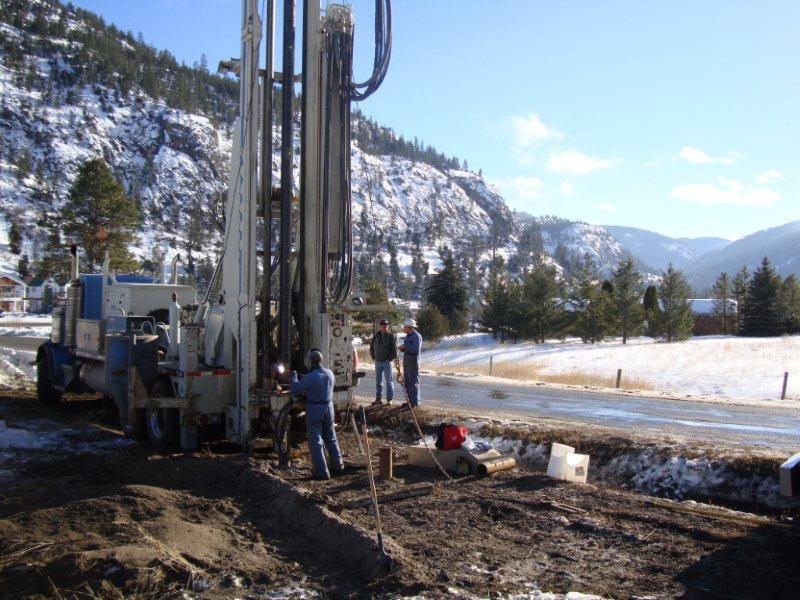 A monitoring well being drilled in the south Okanagan - a result of resourceful networking by the Okanagan Water Stewardship Council.

3 thoughts on “Water Stewardship for the 21st Century”