“In conclusion…there is a high risk of [zebra mussels] not only surviving in some parts of Okanagan Lake, but a high potential for massive infestations.” – Gerald L. Mackie, 2010

Sometimes we need to do environmental triage – focusing on what’s most important, and what approaches are likely to succeed.

When water conditions are right, zebra mussels reproduce rapidly and can completely cover the shells of native mussels.

Lately I’ve been trying to get a better understanding of the situation with mussels in the lakes. There are two of immediate concern – a species native to the Okanagan, the Rocky Mountain ridged mussel, on the verge of local extinction, and an invasive – the zebra mussel, which is spreading rapidly across North America and heading this way.

These species are an example of how we grapple with management approaches and trade-offs, and the best course for protecting biodiversity for the whole ecosystem.

The zebra mussel has a capacity for explosive population expansion – literally growing over top of native mussels, preempting their food.  It has extirpated other native mussel species in lakes it has invaded in the eastern U.S. and Canada. And, although it’s not here yet, the zebra mussel is thought to be the number one threat to our native mussels.

The Government of Canada has recognized the rarity of the Rocky Mountain ridged mussel and is considering listing it as “Endangered” under the Species at Risk Act.

Although Rocky Mountain ridged mussels occur in small numbers throughout the western states, the Okanagan is the only place they occur in Canada. Ideally, a listing is the catalyst for public awareness and support, and would trigger substantial funds for recovery efforts.  However, the uncertainties of federal budgets, and the Act’s  focus on single species protection rather than whole ecosystems, can lead to unintended consequences. For example, in the Fraser Valley, the listing of Nooksack dace, a small freshwater fish, has come in conflict with maintenance of flood control channels.

Here, any recovery plan that does not include aggressive efforts to stop zebra mussels is likely to fail. And even without the invading zebra mussels, population recovery of Rocky Mountain ridged mussels is uncertain. Part of the problem is that we aren’t able to “manage” living systems the way that we manage other resources, especially living systems that we know so little about. We usually start with studying the biology, to understand how human activities affect plants and animals and what conditions they need to survive. In practice, this is depends strongly on research dollars – even for listed species. 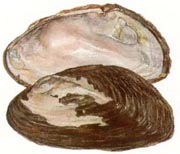 In the case of the Rocky Mountain ridged mussel, research is very sparse and little is known about even their most basic biology and ecology. Regardless, we know the two primary ways that any species is likely to go extinct: human-caused habitat loss, or as a result of invasive species that act as predators or competitors, or dramatically change the habitat. Both of these threats apply to the Rocky Mountain ridged mussel.

Less than 15% of the Okanagan lakeshore has been surveyed for Rocky Mountain ridged mussels, and much of the potential habitat is threatened by foreshore alterations, with regulatory agencies at the limits of capacity for monitoring and enforcement. Another potential issue is lake-level draw downs, desiccating exposed mussels in times of drought.  This is especially a concern for the future, in that climate change increases the risk of multi-year droughts and periodic water shortages, and which will require flexibility in lake level management for other environmental as well as human needs.

Meanwhile, the zebra mussels are heading west from lake to lake, carried by boats and fishing gear. They have become pervasive across eastern North America, reaching western states within 20-years of their introduction from Europe. The Okanagan is thought to be their ideal habitat: water with low acidity, and dissolved calcium to grow shells. The zebra mussel invasion is the primary reason that Rocky Mountain ridged mussels are recommended for listing, and it is estimated that the native mussel will be gone within 3-5 years of zebra mussels being introduced to the Okanagan. 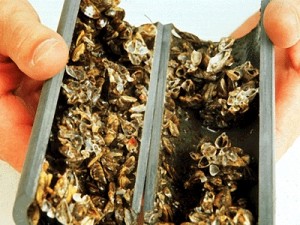 Zebra mussels will also have a huge impact on the Okanagan lake ecosystem as a whole, and a huge impact on the economy.  The base of the lake food chain is green algae, microscopic plants that feed larger plankton, and small invertebrates that in turn provide food for fish including kokanee and sockeye salmon.

Zebra mussels in the millions can very effectively “clean up” the algae in the lake, radically restructuring the food chain. As we’ve seen in the Great Lakes region and other places they’ve taken hold, zebra mussels impact the economy by clogging water intakes and other infrastructure.

As with everything, there are many players involved in the listing of an endangered species. The only way to protect Okanagan lakes from threats like invasive species, species loss, and climate change is by having a frank discussion about what’s possible. Resources are short at every level of government, and we need to know who has real capacity to take on different tasks and adjust our collaborative work plans accordingly. With so many unknowns, we also need flexibility to change the course of action as conditions change, without getting tangled in one’s own red tape.

Often, the first reaction people have about an endangered species is to ask, “What is it good for?” The Species at Risk Act doesn’t make utilitarian distinctions; however, according to staff at DFO, funding priority is usually based on the feasibility of enacting the recovery strategy. If the Rocky Mountain ridged mussel is listed, it will compete for federal funding with other endangered species that may have a bigger impact on the ecosystem and a better chance of recovery.

If a species protected under the Act is not well-funded (for whatever reason), local communities may be left with restrictions which will do little, by themselves, to ensure recovery.  If zebra mussels can’t be stopped (and we should be making great efforts), is it possible to create a feasible recovery strategy for Rocky Mountain ridged mussel?

The Okanagan Basin Water Board is one of the largest supporters of water quality protection and environmental restoration in the valley – with support for biodiversity preservation as part of a larger strategy to preserve the quality of the Okanagan lake system. We try, with every project, to look at the health of the ecosystem across a spectrum of human and ecological needs, in a time of environmental change.  A listing under the Species at Risk Act is not always compatible with these goals.

This is the time to sit down, with senior government partners, and talk about what are our priorities and vision are, and how we optimize within this complex system. What is our best course for environmental triage?