“All men are equal before fish.” – Herbert Hoover

Last week, I attended a workshop in Portland, Oregon, on the future of salmon under climate change.  Our delegation had been invited to talk about the resurgence of sockeye in the Okanagan River, and our experiences with collaboration. Scientists, managers, fishers, First Nations, and other friends of fish, gathered from around the north Pacific to talk about good news, bad news, and what’s possible. It was a diverse group from far-flung geography,  bound together by the need to manage salmon under rapidly changing conditions.

And while much of the conversation was focused on science, there was an important thread about values. What we protect and care for depends strongly on what we value as communities.

While there is uncertainty about the impacts of climate change in specific salmon areas, almost all models project the same outcome: warming waters, summer and winter. Warmer summer waters interfere with spawning, rearing, and migration – and can lead to fish kills in oxygen-poor water.  Warmer waters in winter (particularly in the ocean) could expand the range of salmon to the north as the sea ice breaks up; but this wouldn’t replace the loss of salmon to southern ecosystems and communities.

Another outcome is a change of the hydrograph – that is, the timing and volume of flows within the year.  Here in the Okanagan, we expect an earlier snow melt, bigger spring freshets, and a longer, hotter, low-flow season at the end of the summer – ironically during kokanee spawning season when the water demand for irrigation is high.  All climate models look at long-term trends, so we can’t know what will happen where, when. 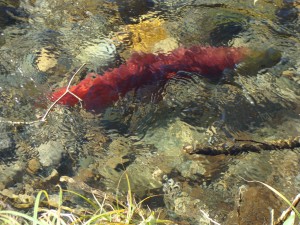 Salmon like to spawn in cool creeks with the right size of cobble.

The three case study regions given at the workshop (Southeast Alaska, Snohomish watershed near Seattle, and the Okanagan) had made progress restoring and protecting salmon habitats, working with communities, and for better management of fisheries near-shore. The leadership from the Tulalip tribes and Okanagan Nation shown brightly.

The black box is the Pacific ocean. Not much research has been done on what happens to salmon during the years they spend in the wild ocean. Food webs are changing from heavy fishing pressure. Ocean acidification from carbon dioxide buffers global warming, but will likely reduce the number of calcareous-shelled plankton at the base of the food chain (this was a sobering presentation by Dr. Chris Sabine, of NOAA). 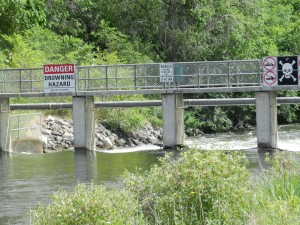 Drowning isn't such an issue for salmon, but some water control structures do need to be modified to improve passage.

We have a much better handle on onshore habitats and the factors that determine the success of reproduction.  If you can control the sources of mortality for juvenile salmon, there will be larger numbers that can go out and adapt to the environmental factors in the ocean. This has been the focus of the Okanagan Nation Alliance fisheries department, working with the Canadian Okanagan Basin Technical Working Group. Improving stock assessments, (determining how many fish are returning, and adjusting fish quotas accordingly) is also going to be important for managing the black box effects of ocean processes.

Over the long term, with the onset of climate change, it will be very important to protect habitat diversity because conditions can vary from stream to stream and reach to reach, depending on weather patterns.  Given half a chance, and sufficient numbers, salmon are resourceful and resilient and will find good habitat patches where they exist. Genetic diversity is also critical.  When conditions are rapidly changing in the environment, genetic variation is the tool box that lets a population rapidly exploit new opportunities and survive. It was heartening to hear about the new research being done on salmon genetics and adaptation.

There was consensus within the group that ‘uncertainty’ isn’t one of the unknowns, although the science is incomplete, the general patterns aren’t in dispute.

How do you make good plans under these conditions?  You work on what you can, and prioritized actions that have proven results. What steps are actually taken depends on the capacity and position of individuals and organizations. 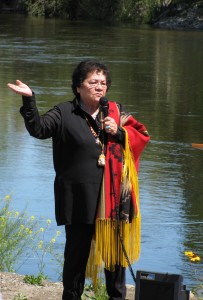 Elder Modesta from the Osoyoos Indian Band giving a prayer to mark the official opening of the Okanagan River Restoration Initiative.

Here in the Okanagan, simply managing the timing and volume of water releases from the Penticton Dam has made a huge difference in the survival of salmon eggs and young. Improving the management of water flowing from Osoyoos Lake, as I wrote in a recent post, would also have a benefit with fish passage and reproduction. The Okanagan River Restoration Initiative has restored a significant reach of the Okanagan River, setting a dike back, and opening up an old oxbow to provide more room for the riparian corridor, rebuild salmon habitat, and give the river room to move.

It is often difficult for scientists and government employees to shift their perspectives from neutral arbiters of information to discussions of values.  Nonetheless, it was powerfully apparent that these scientists, managers, and fishers have a passion for salmon recovery, and an understanding of the importance of this species to their communities and to the broader ecosystem.

The most positive thing that I took away from the workshop is a strong feeling that the game isn’t over until it is over. Salmon surprise us by their ability to bounce back. There are many committed intelligent people working to protect and restore salmon populations and habitats in the face of environmental change.  Conferences like this one are extremely important for increasing our collective efficiency by sharing knowledge and focusing on what works.

Related Posts: Osoyoos Lake: Live;  Loving the lake so much it hurts: why we need a whole-lake plan

Question: What next steps should be taken to restore salmon in the north Pacific?

4 thoughts on “No vacation in the Salmon Nation”