“For time and the world do not stand still. Change is the law of life. And those who look only to the past or the present are certain to miss the future.” – John F. Kennedy

It’s startling (and creepy) to swim into a milfoil bed – an unexpected brush against your side, a light tug at your ankles …Yikes! Is that a fish?... Some people won’t swim in the lake; and American newspapers even publish stories about “milfoil-related” panics and fatalities.  We don’t want lakes to be like swimming pools, but it’s disconcerting to know that this invasive plant is here to stay, and we have to learn to live with it. 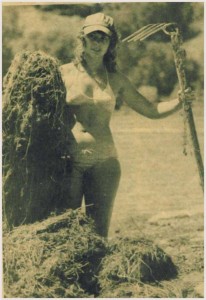 Cleaning the beaches, circa 1974

This post is about living with change – changing landscapes, changing water supplies, changing culture and population. We have to be ready and able to change too. What can we save? Where should we throw the greatest effort? Who will lead?

The globalization of weeds (and weedy animals) seems unstoppable, coming wave after wave.  As a student, I felt an overwhelming sense of responsibility and occasional despair. I imagine it’s the same for students of glaciology – watching the melt. Invasive species are a lot like climate change.

But a subtle and powerful change happens when you go from studying statistics to actually engaging in the world. You wake up in the morning, roll up your sleeves and start wrestling problems. The feeling of empowerment is buoyed in the Okanagan by a cultural tide of optimistic pragmatism: we will always find some way forward. 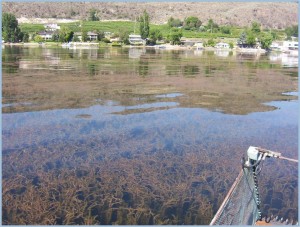 Eurasian watermilfoil growing thickly in the shallows of Osoyoos Lake.

Mindset is important. If you are stuck between a rock and a hard place, you have to trust there’s a way to squeeze out the middle. If you are clear about the end goal, like swimming freely in the lakes (without weeds) or like not wanting summer water restrictions (a principle of the Sydney, Australia water conservation program), there can be some flexibility on how to get there.

I don’t mean to make light of environmental degradation. A man from Northern BC recently asked me for advice about water pollution from a large mining operation in his neighbourhood. Some things are so big, I can barely think about them. I just squeezed his shoulder and gave him what encouragement I could. 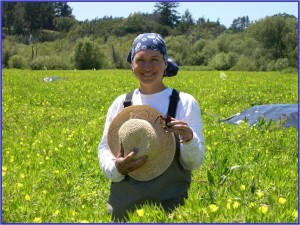 Another watershed, another time, another weed problem. Standing in a meadow of invasive Ludwigia, holding an invasive crayfish.

The invasion of (what’s formally called) Eurasian watermilfoil coincided with the beginning of the Okanagan Basin Water Board, around 1972. Brittle news clippings register alarm across the valley – a fast-growing plant, choking beaches and boating areas. The Board joined with the province to fight it; and although we never won the war, over the years we’ve come to a detente.

Years ago, I was part of a different weed war in California, tackled with  full-force, emergency measures on a massive scale. One windrow we harvested was half a mile long, twelve feet wide and 6 feet tall; but in the end, there wasn’t capacity or funding to maintain control. 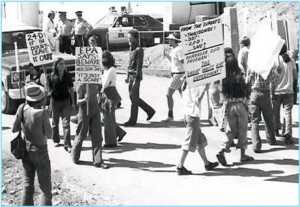 There was huge resistence to herbicide applications in the Okanagan lakes. Ironically, herbicides were approved for milfoil on the US side of Osoyoos Lake in 2011.

The lesson, for me, is that whatever crops up, you have to be very thoughtful and pick your battles.  With weeds, unless the invader is stopped at the outset, eradication is very costly (if it’s even possible) – and not just in money. But that doesn’t mean you can’t move forward.

The BC government made a heroic attempt to eliminate milfoil in the Okanagan – spending up to $2 million a year in the 1970s. There were boat inspections to stop its transfer from lake to lake, and contests for inventors to build control machines.  They even tried 2,4-D, before public outcry brought it to a halt.

Without so much as a pause, milfoil spread everywhere. Evaluating likely success vs. priorities, the Board’s ambitions were scaled back to keeping the beaches clean. 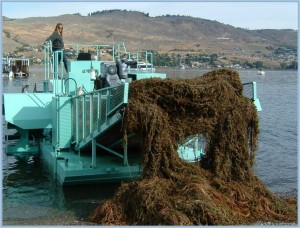 Now, milfoil control is like garbage collection; and I mean that in the best possible way. Instead of brute force, we’ve figured out what’s manageable, and what’s most important to people. In brief, we are doing winter rototilling – bringing up roots that wash to the shore and die – and summer harvesting to clean up. Now lake-goers can mostly swim unmolested, although there is an environmental trade-off with disturbance at the public beaches.

A trade-off in one community may not be accepted in another. In the US, rototilling is frowned on, in Canada, herbicides are off the table. Weed control, or (conversely) invasion success, depends as much on social context as on the natural environment. If the Rocky Mountain ridged mussel is listed as “endangered,” there will be another cascade of changes in the milfoil program. More change, more adaptation. Perhaps we’ll get some help from milfoil weevils.

The closing point I want to make is about leadership. To respond or adapt to any kind of environmental change, you have to have an organized response. 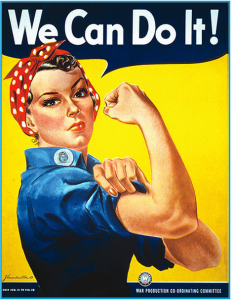 Not to endorse the battle metaphor, but remembering the strength of joined forces.

In the next few years, we will have a new invasion – from zebra mussels. It’s like watching a storm front rolling in from the south and east. When they get here, there will be huge public costs and massive changes to the ecology of the lakes. But jurisdiction is fuzzy, and it’s hard to know the best course of action.

To even slow them down (and it’s amazing how fast these leg-less creatures can travel) will take a huge public education campaign and a border inspection program for incoming boats. Many agencies would need to participate. Since the entire province will be affected, it is going to take more than an ad hoc approach. Who will lead?

We have to take a leap of faith that we have the ability to work together, and that together we will find ways to adapt.

Here’s an upbeat but fact-filled take on milfoil in the Okanagan.

4 thoughts on “A Parable of Weeds: change, adaptation and leadership”