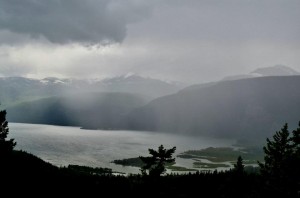 I’ve been deeply unsettled by news of the mudslide in Johnson’s Landing last week – a place I’ve visited often.  A tragedy is the worst kind of catalyst for change.

After a month with twice the record rainfall, Gar Creek unleashed a debris flow down the mountain.  At 10:30 Thursday morning, three houses sat surrounded by meadows and forest. By 11:30, they had been swept away by a wall of dirt, rock and twisted trees.

Four people lost their lives, and all of BC was shaken. 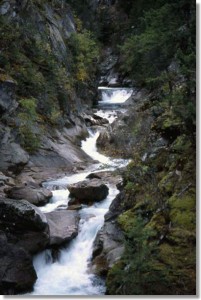 It’s now a high priority to get the geotechnical experts out there.  What triggered it? How can we prevent it from happening somewhere else?  There are countless creeks in British Columbia.

And what was the role of climate change? It’s almost an academic question in this context. One of the biggest challenges with a shifting climate is that there are no direct links to specific events. There have always been freak floods and catastrophic landslides.

More than anything, tracking climate change is a process of counting anomalies – estimating probabilities, estimating risk.  How often has this weather happened in the past? How often is it happening now?

A tragic debris flow through Johnson’s Landing becomes an entry on the ledger of extreme weather disasters, along with the floods last week in Japan and the scorching drought of the corn-belt. More and more, planners have to rely on cumulative statistics to give some direction, to help communities reassess their odds in changing times, and regain stability.

But it is one thing to have a sea of statistical information, and another to know what to do with it. 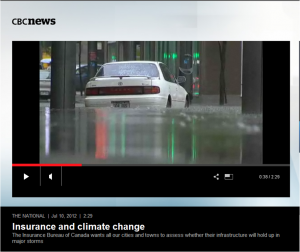 Coverage on the Insurance Bureau of Canada’s push for climate risk assessments. Click on the picture to watch the video in a new window.

I felt a rush of hope at a recent talk by Robert Tremblay, of the Insurance Bureau of Canada. They have an elegant new approach for  assessing the climate risks of flooding storm drains and sewer backups in urban areas.

It sounds mundane, but has a huge impact. Only yesterday they had to evacuate a medical clinic in Nelson after a heavy rain backed up the pipes.

This new method won’t help rural communities like Johnson’s Landing, but it can save other homes for other families. 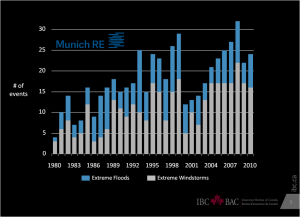 Data from a global reinsurance company, Munich Re, showing the increase of extreme weather events. Click on the picture to make it bigger. Image courtesy of Robert Tremblay of the Insurance Bureau of Canada

For decades, insurance companies have been collecting information about floods, fire and wind, and where the damages are. They see the effects of climate change very clearly – globally, extreme floods tripled between 1980 and 2010. Wind events doubled.

Now they are making GIS output from their risk assessment tool freely available to urban planners – pushing to get these kind of analyses into the mainstream, and trying to stem the rising tide of damage from failing infrastructure.  It’s their homes and businesses, too.

Instead of rough estimates, planners can use the municipal risk assessment tool to map where the worst infrastructure failures have happened in the past, and overlay climate projections for increased intensity, duration, and frequency of rainfall.  They can show – ahead of time – where the risks are. 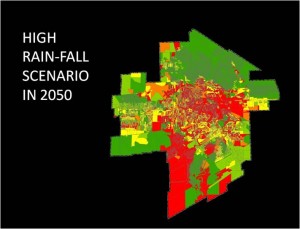 This is an example of a risk map from the Insurance Bureau of Canada’s municipal risk assessment tool. Image courtesy of Robert Tremblay of the IBC.

It’s a simple and powerful approach, with implications that reach far beyond flooded basements in urban areas. In the future it can be expanded to look at many more weather impacts.

But most importantly, I think it can help us make sense of climate change at the level of the basic social fabric – our homes and neighbourhoods – and for the first time, make it a normal part of planning.

This tool is a huge important step forward if we want to move beyond the extremes of inertia and disaster-driven policy response. 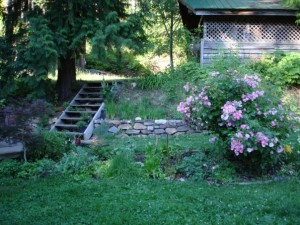 Of course there will always be catastrophes.  I grieve for the Johnson’s Landing community, and for everything that has been lost.

Likely the slide was a combination of terrible circumstances, and the heavy rain contributed only a part – but if we can have a standard process for understanding climate risks in cities, I have hope for rural areas, too.

It’s not so much that we lack ways to expose where we are vulnerable, we just haven’t brought them into common practice. 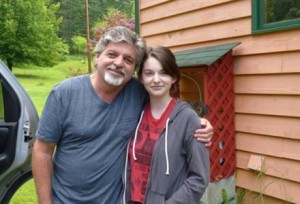 Valentine and Rachel Webber from The Province, July 17, 2012

I can accept that we will have more extreme weather, but I want to see progress in how we respond and adapt.  I want to know the risks.

The following is a video clip about the mudslide, courtesy of Shaw Media.

10 thoughts on “Getting beyond inertia and disaster-driven policy response”