Okanagan snow packs are below average.

As of January 22, the Mission Creek snow pillow was 70% of normal, and Brenda Mines was 64% of normal.

Long-term weather forecasts continue to predict above normal precipitation and below normal temperatures for B.C. and Washington State, and warm, dry weather for California, but so far the opposite has occurred.

There’s a nice discussion of it here:
http://cliffmass.blogspot.ca/2017/01/dry-north-wet-south-expected-winter.html 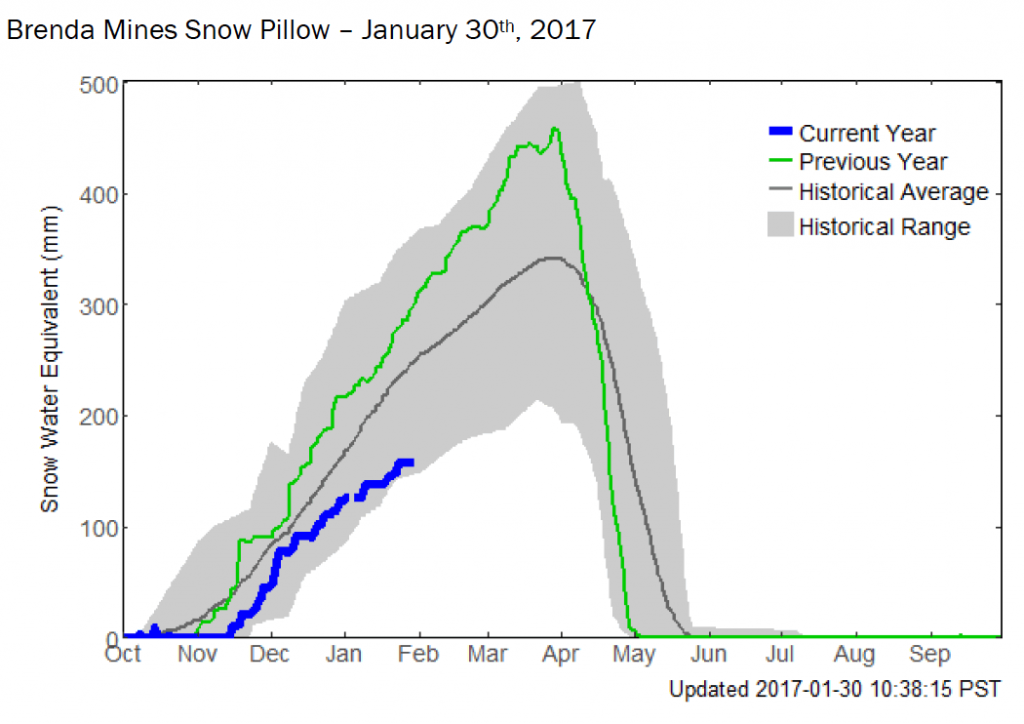 The drought in California and other portions of the U.S. Southwest was very influential for how we responded to the drought in 2015, as well as the revamping of the province’s drought response plans. This year’s rain has broken the drought for surface water through much of Northern California. Aquifers are also recovering in many parts of the state, as wetter conditions reduce pumping and increase recharge. Nonetheless, some aquifers will likely never recover because of the severity of the overdraft.

Here is a good perspective from the U.C. Davis’ Center for Watershed Sciences:

For policy-makers the distinction is important. If every year is labeled a drought crisis or emergency, then “drought” loses important meaning and urgency needed to motivate and conserve to higher levels in drier conditions. In addition to managing during drought, we must manage other years for normally dry conditions, which will often include deliveries less than desires and storing water and suppressing some demands in preparation for still-drier drought conditions.
https://californiawaterblog.com/2017/01/10/tails-of-californias-drought/

Lake Mead and the Colorado River are far from recovering. Arizona is about to launch severe water conservation policies, because there is a 50-50 chance that the lake will fall so low this year that Arizona will be cut off from its share of the water. Much of the water conservation would come from agriculture and groundwater replenishment programs. Phoenix and Tucson water rates will also increase. The lake is now 135 ft below full pool, and 34 ft above the minimum for power generation on Hoover Dam. However, they expect to benefit from a good freshet this year, given a higher than average snow pack in the mountains.

For more on the Colorado River politics, see:
http://www.desertsun.com/story/news/environment/2017/01/20/big-unfinished-business-trump-colorado-river-deals-shrinking-salton-sea/96846680/