Increasing Air Temperatures:
Although the climate model used in Phase 2 suggests that the average total annual precipitation won’t change significantly in future, air temperatures are expected to increase, which means that more winter precipitation will fall as rain rather than as snow.

Furthermore, the future high elevation snowpack would melt sooner – by roughly one week over the 2011-2040 period, and 2-3 weeks over the 2041-2070 period. This will increase the importance of reservoirAn artificial lake used to store water storage.

Snow storage is an important component of water supply, so there may be less water available for summer use.

Snow Storage Animation
(opens in a new window)
Click to see how snow accumulates throughout the season.

Three Year Drought:
Under the future three-year drought scenario, average annual net inflows to Okanagan Lake are expected to be roughly half of what they are presently. Assuming such a scenario with current operating procedures, Okanagan Lake levels would drop below normal operating ranges, and could affect the ability to keep water flowing in Okanagan River. 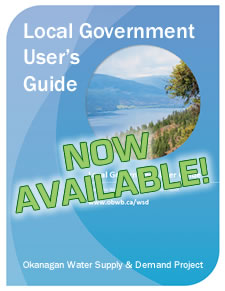 The Okanagan Basin Water Board and 13 of its partners have been presented with the "Award for Excellence in the Water and Waste Community" by the BC Water and Waste Association (BCWWA). The award was presented in recognition of the partnership’s work on the three-year extensive Okanagan Water Supply and Demand Study.

Search by keyword or browse by topic below, or perform an Advanced Search (opens in new window).

All data collected by the Project is housed in the Okanagan Water Database and managed by the OBWB.

Requests for specific data sets and models should be directed to the OBWB.