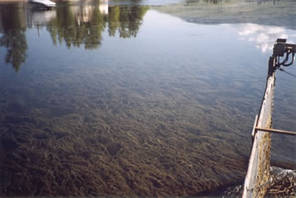 Eurasian watermilfoil (Myriophyllum spicatum) is a rooted submersed plant inhabiting the shallow waters of lakes in British Columbia and other parts of North America. The species is said to have been introduced from Eurasia in the late nineteenth century, likely in ship ballast, though the first documented occurrence was in 1942 in a pond in Washington, D.C.

The plants form thick underwater stands and dense mats on water surfaces. Colonization of new sites occurs by vegetative fragmentation as the plant develops auxiliary buds that separate at the node. Some auxiliary buds have root development even before detaching from the parent plant, allowing new plants to establish quickly. In the summer, stem fragments break off, assisted by natural or man-made wave action. Once established, eradication of the plant is almost impossible. 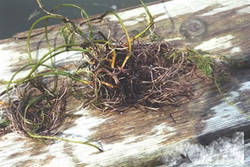 The maximum depth where rooted plants are found will vary with the depth of light penetration; for Eurasian watermilfoil in the Okanagan this is typically about 5 to 6 metres deep, with some plants found up to 8 metres deep.

Eurasian watermilfoil will flourish in habitats enriched with nutrients, though it is often also found in oligotrophic environments similar to the Okanagan lakes system.